NAVER LABS held a press conference on June 25. After the recent CES 2019, it was an opportunity to reveal what kinds of missions and roadmaps are used in the development of the current technological advancements taking place at NAVER LABS. The vision for the future of NAVER LABS’ technologies presented on this day was summarized as “Connect NAVER to physical world.” 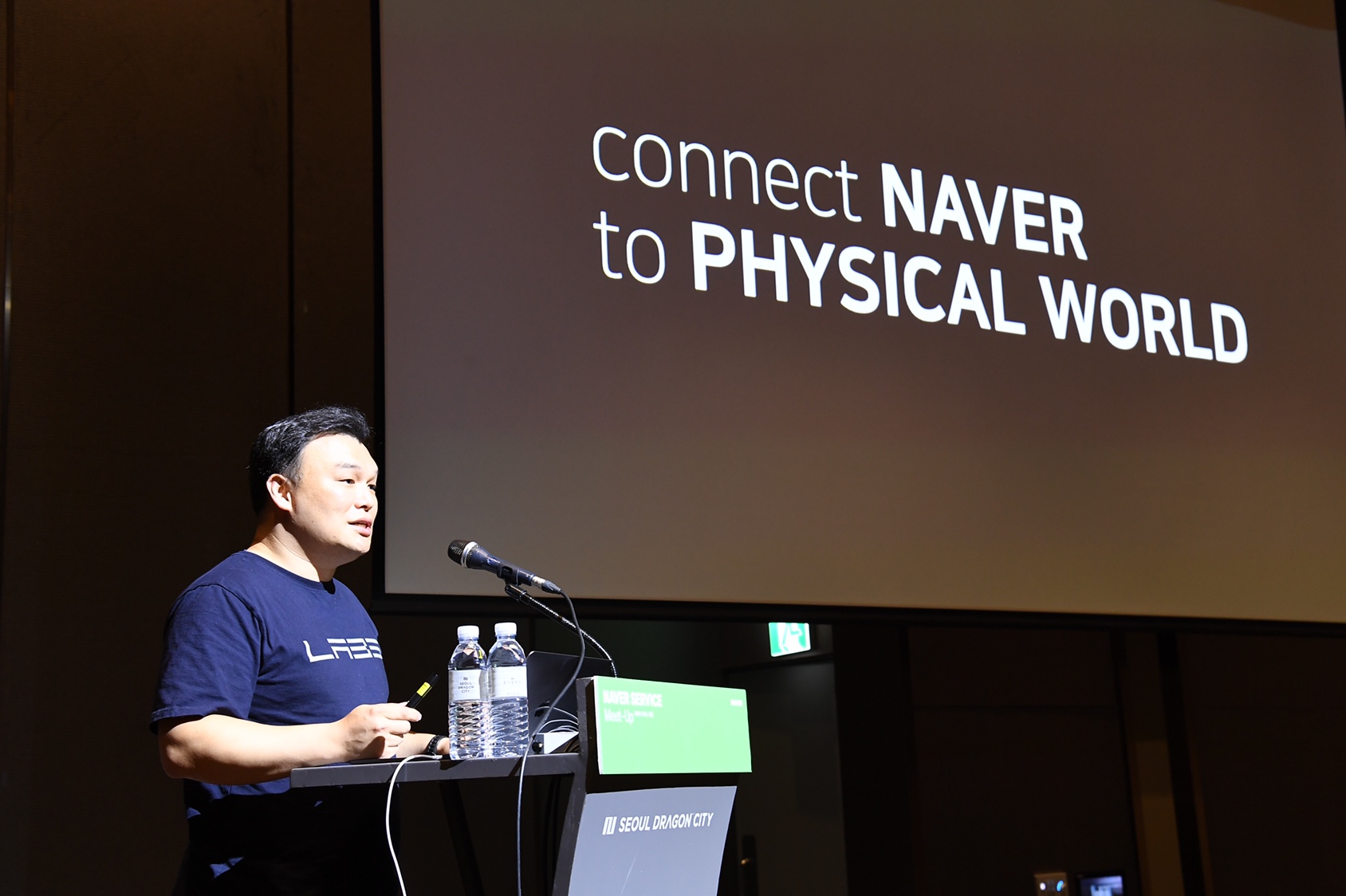 The background for this direction originates from the rapid blending of the boundaries between physical and virtual spaces with technologies, such as high-performance sensors, AI, robots, and autonomous driving, each gradually approaching the critical point of popularization. Although NAVER has grown to be the dominant force of the online virtual space over the past 20 years, if NAVER is to continue to sustain its core value of connecting information and services, it is imperative to expand on modes, channels and methods. On this topic, NAVER LABS CEO Seok Sangok announced that the very space where users live may soon become a service platform, and NAVER LABS is concentrating on research for robotics, AI, autonomous driving, AR, and HMI (human-machine interaction) to enable the natural linking of physical spaces and NAVER services.

CEO Seok presented the concept of self-moving spaces, or auto-movables, for changing the city of the future. Seok emphasized that it will not be a matter of movables or immovables, but rather a third type of infrastructure that will greatly change the way we live, and that in the near future it will be these auto-movable spaces, equipped with information, services, and products, that will create entirely new connections for us.

NAVER LABS plans first of all to develop the solutions for building and updating 3D precision data for all spaces—indoor, outdoor and road-level—and to complete the autonomous machine platform that can move on its own in various spaces to provide information and services based on the technology and data of HD mapping, localization, 5G cloud computing, 3D vision, etc. It was also revealed that they plan to raise the completeness of HMI (human-machine interaction) for the natural provision of services among people in everyday spaces.

A-CITY, the vision for a future city undertaken by the technologies of NAVER LABS

'A-CITY' is the vision for a future city that NAVER LABS is forming through this kind of technological road map. Each urban space will be closely connected by a variety of autonomous machines, with artificial intelligence analyzing massive data to make predictions, and the processes to informationalize the data, and even services like delivery and distribution will be automated. CEO Seok explained that, “NAVER LABS is taking on the challenge of A-CITY as a concept, but it is an inevitable future, and it is not limited to simple services like shipping and logistics, but is going to change the way we live with tremendous possibilities.” 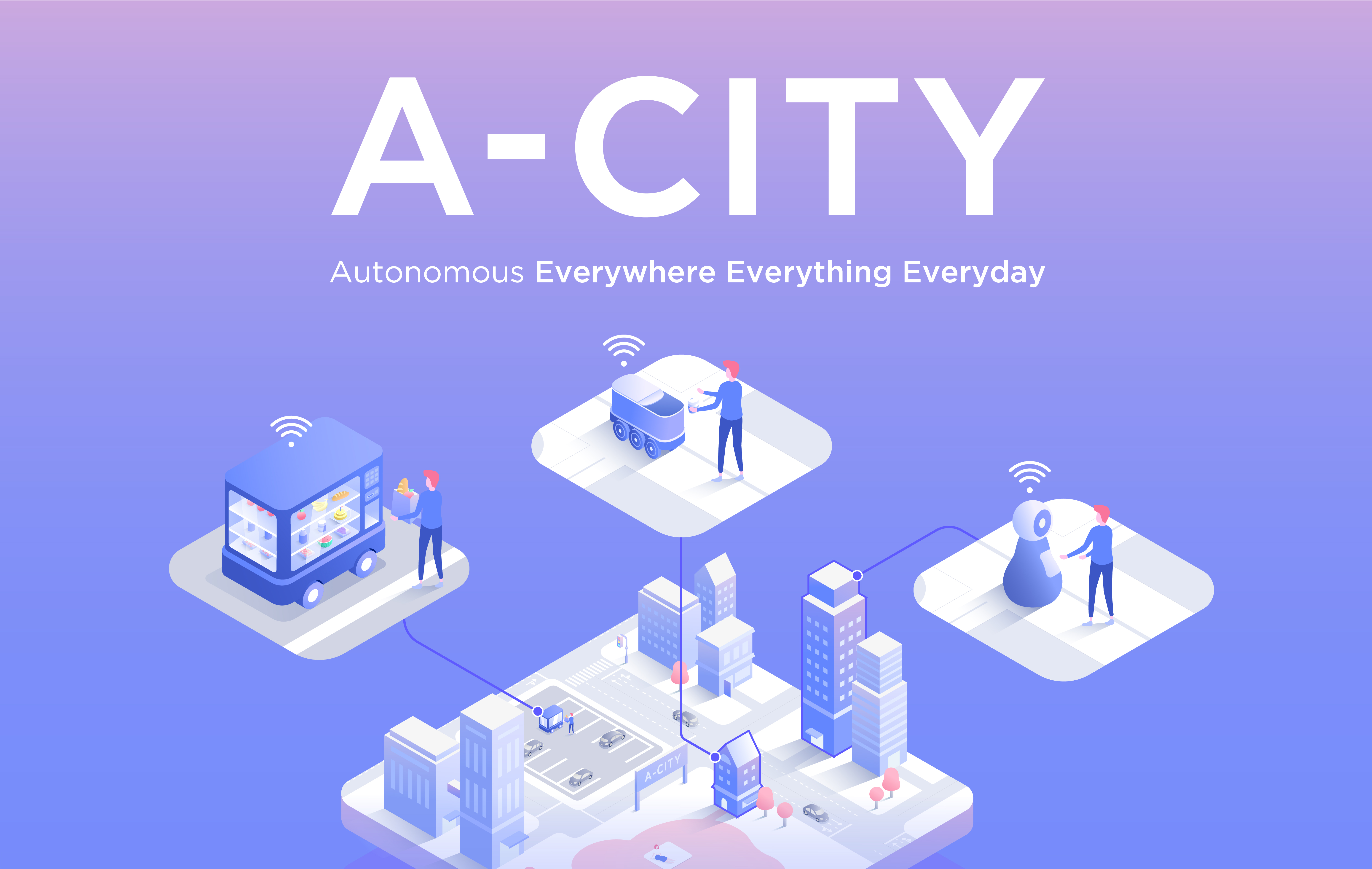 The smart autonomous machine platform that will connect all spaces: indoors-outdoors-roads

CEO Seok introduced the solutions by NAVER LABS for the 3D space data that forms the most fundamental base for service robots, autonomous driving, AR, etc. Large-scale indoor spaces are covered by the M1 mapping robot. The upgraded version, M1X, has been developed to a level enabling completion of point cloud mapping within about 40 hours following wide-range scanning of massive indoor space.

Next, the plan regarding sidewalks, regarded as the middle ground between roads and indoor areas, was also revealed. A project called ‘COMET’ is underway for the development of technology for mapping and localization on sidewalks, which have uneven surfaces and are highly influenced by lighting and the seasons. NAVER LABS, in collaboration with MIT, revealed that they plan to later apply this mapping equipment and algorithm to the four-legged walking robots MIT Cheetah 3 and the MIT Mini Cheetah. 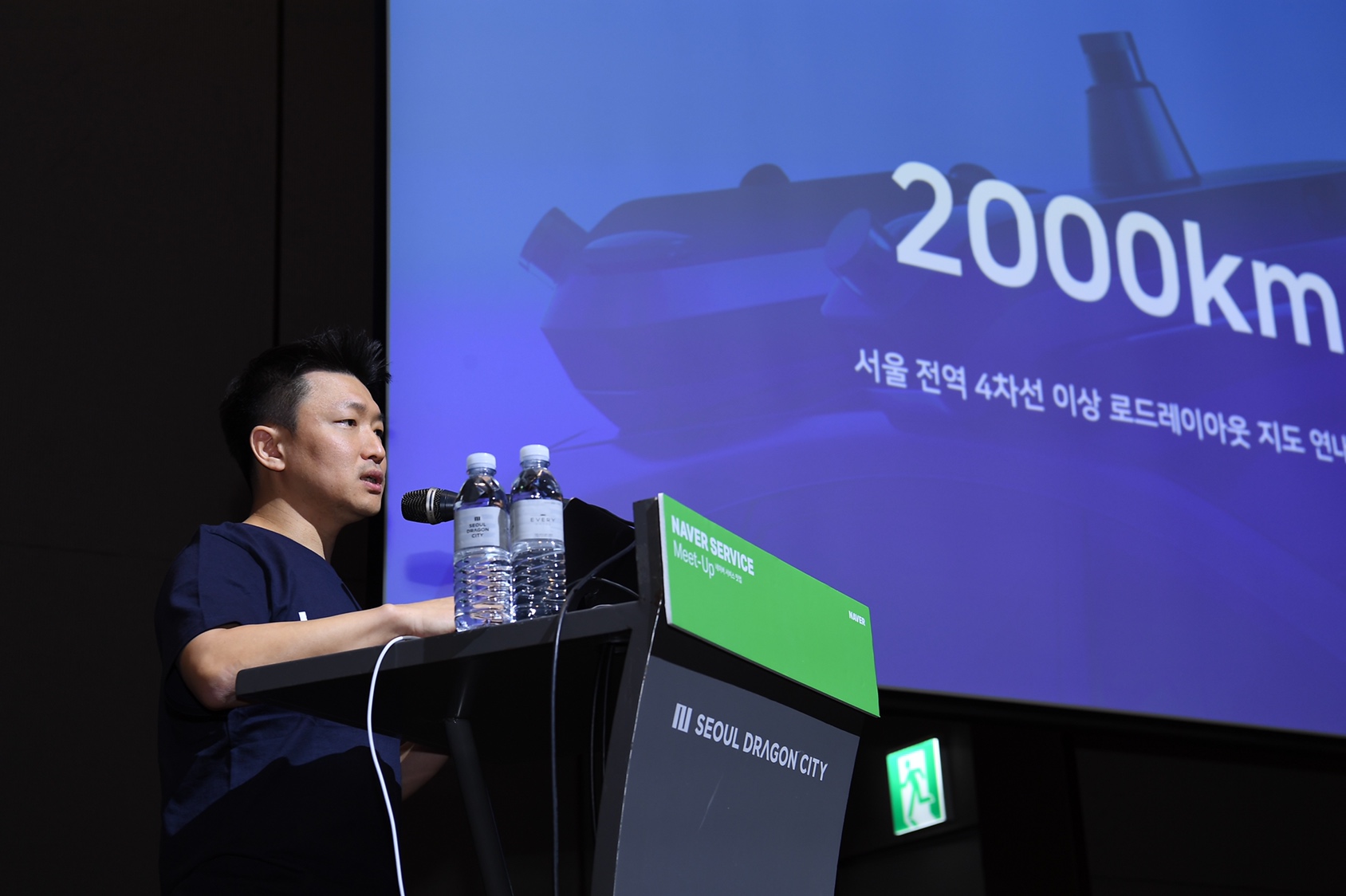 Following CEO Seok, Leader Peck Jongyoon, who introduced core technologies for autonomous driving from NAVER LABS, emphasized the unique characteristics of the road environment. Although sidewalks can be seen as spaces connected with indoor areas, roads differ completely by the traffic signal system, safety standards, etc. Having demonstrated the road autonomous driving technology as a “combined art” where technology from a variety of fields must be solved including mapping, localization, perception, prediction and planning, Peck stated that an HD map takes an especially important role in autonomous driving within downtown areas where there are numerous GPS shadow zones. The sensor data from the HD maps and GPS, LiDAR, camera, etc., all set up in-house, is being combined for the advancement of localization technology that offers very high precision while also working seamlessly.

Leader Peck also introduced the hybrid HD mapping technology that utilizes the internally developed MMS vehicle, R1, and aerial photos to make a HD map for wide areas, announcing that within the year they will complete a layout map of 2,000km of main 4-lane or larger roadways in downtown Seoul. Starting with the current 300km section across the major areas including all of Gangnam-gu, Yeouido, the Sangam area, and Magok, the plan is to rapidly set up road layout data to cover the entire Seoul metropolitan area. The automation algorithm enabling road surface recognition through deep learning and vision technology to do this was also introduced along with research on the crowd-sourced mapping format HD map updating solution called ACROSS.

Next, Peck announced that “the plan is to increase the number of vehicles with temporary permits for autonomous driving from the Ministry of Land, Infrastructure and Transport (MOLIT) in order to accelerate the development of technology for autonomous driving on the road,” and that the “goal is to later develop an autonomous machine for the road that can be utilized for a variety of purposes including distribution, delivery, and unmanned shops through algorithms and data verified in the actual roadway environment.” 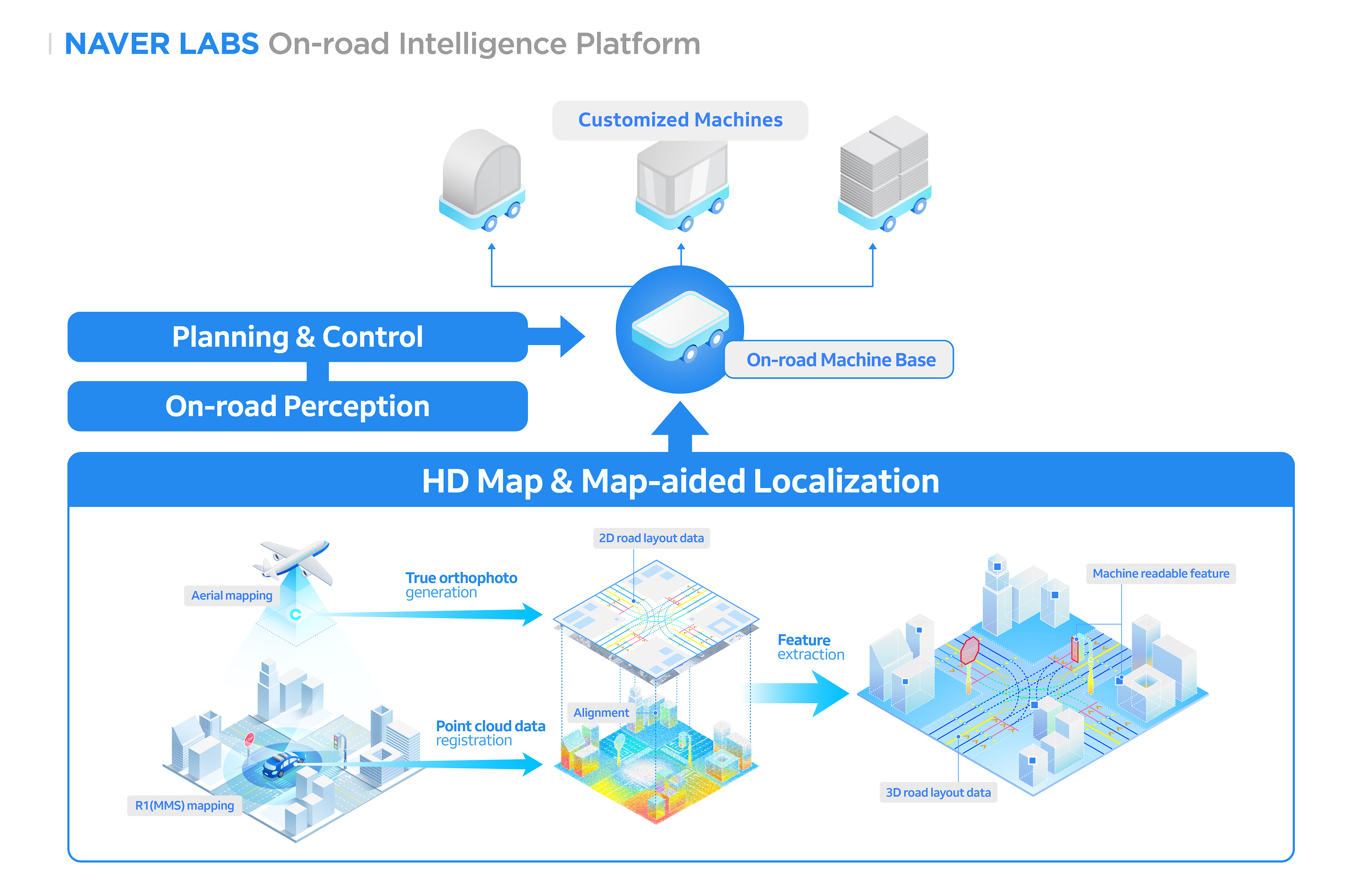 Of all of these, CEO Seok revealed that the combination of the 5G brainless robot technology and the map-cloud-based AROUND platform, which gained high interest at CES 2019, is one of this year’s crucial missions. It is a strategy that, through collaboration with Qualcomm, commits to maximizing performance and usability by applying the technology of the world's first successful 5G brainless robot demonstration to the autonomous driving robot platform. The “5G brainless robot” technology, which moves the computer that serves the role of the robot's brain to the cloud and connects with it via 5G, can control a large number of robots simultaneously and thus effectively reduce manufacturing costs, and because the cloud replaces the robot's brain function it enables the creation of small robots with exceptional intelligence. Along with Qualcomm, the NAVER Business platform, KT, and others are collaborating to set up this platform, and it was announced that the NAVER Data Center Gak in Chuncheon will be preparing to serve as the brain for a variety of service robots. 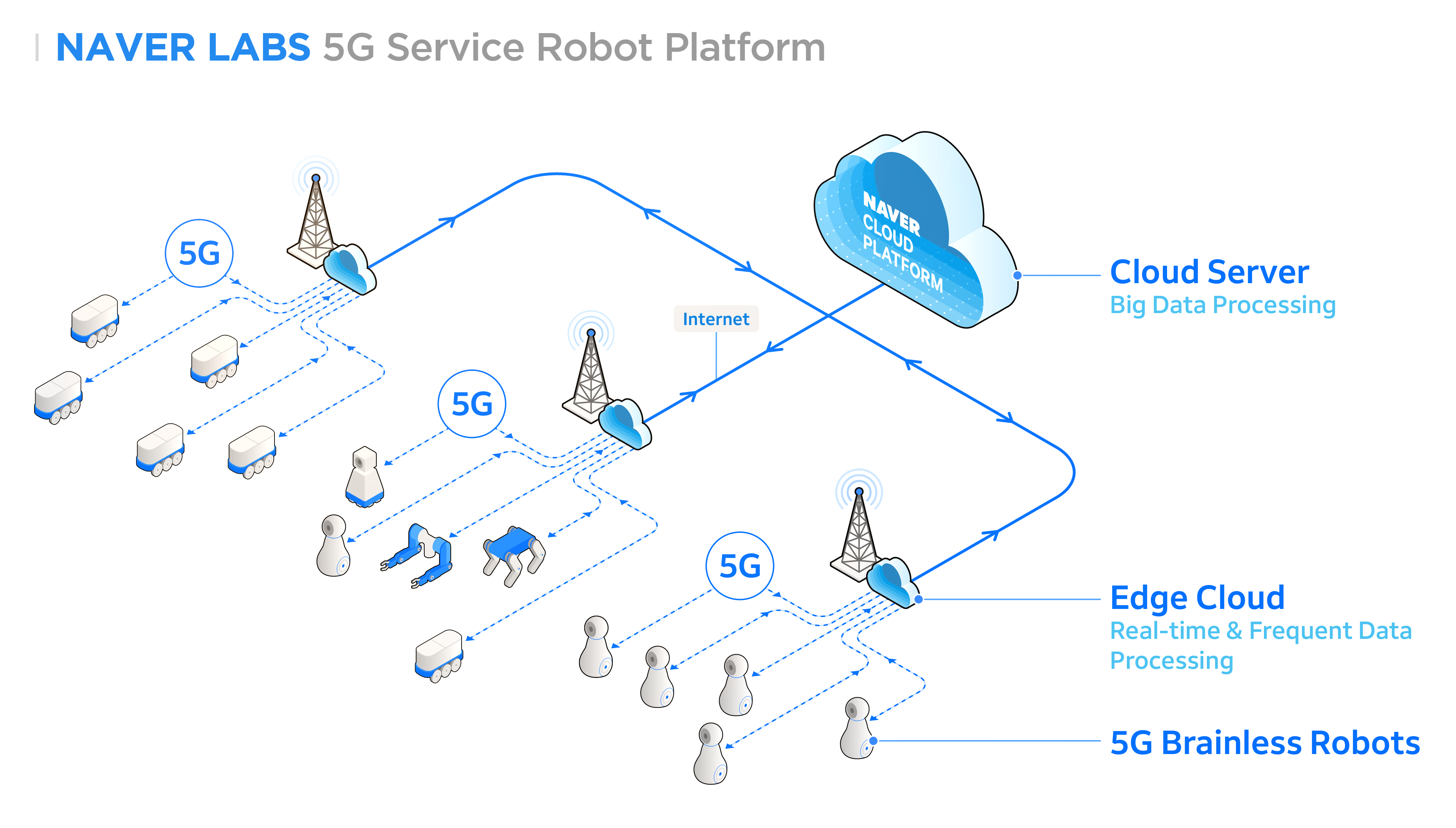 The VL technology, which can recognize the current location indoors using a photo, was also emphasized as holding the highest level of global competitiveness. This technology, which recognizes the location by extracting and comparing the unique elements from 3D data captured by the M1, offers groundbreaking solutions to the problem of localization indoors without GPS access. Apart from VL, it was revealed that AR technology is also in development, coupling with VIO (visual-inertial odometry), which analyzes sensor and video data to track location, and VOT (visual object tracking) technology, which recognizes objects and estimates position or direction using 6 DoF (forward, back, up, down, left, right).

The roles of NAVER LABS as introduced by CEO Seok in this presentation were expressed as having accumulated rapidly because the technologies do not stay in the lab, but are rather oriented toward the spaces of our real lives. He hopes that technology will offer practical assistance to people in a variety of environments, and introduced the collaboration for this with the Seoul National University College of Nursing and the social enterprise ‘Bear Better’, adding that the open research environment where diverse experts can cooperate closely is also an advantage of NAVER LABS.

Leader Peck Jongyoon responded to the questions following the press conference by saying, “We are developing our technologies with a sense of mission. The future is clearly approaching, but there are still not many places domestically that are passionately preparing for it.” He emphasized the importance of the core technologies currently being researched, stating, “I believe that, if we do not prepare for the future, the unfortunate circumstance may someday occur where we have no choice but to use the technologies of other countries.”

In closing, CEO Seok Sangok stated that, “We are taking the lead in preparing for a future where our everyday physical spaces are recreated as new service spaces, within which spaces, machines, information and services are all naturally interconnected,” and conveyed that the goal is to “make the present that we feel is so normal to feel like an inconvenience of the past through technology.”