The kind of talent NAVER LABS seeks is a passionate self-motivated team player. Perhaps the term, “a self-motivated team player,” is an oxymoron. Even still, we have continued to venture out and the culture continues to snowball. We present the stories of experts in various fields cooperating without boundaries, making decisions on their own and taking on challenges together. Here is how to work at NAVER LABS.
See all series of H2W@NL

Last November, NAVER LABS distributed its HD map dataset for free, the first company in Korea to do so. This was to help a large number of autonomous driving technology researchers at home. Then, why are HD maps important for autonomous driving research? HD maps ensure safe and effective autonomous driving. HD maps and synced sensor data allow accurate and uninterrupted recognition of the current location even in the city full of high-rise buildings, provide a comprehensive view of intricate mazes of narrow streets to effectively plan routes, and spot traffic lights/crosswalks in advance via HD maps to raise the accuracy of real-time recognition. Therefore, from the very beginning of autonomous driving research, NAVER LABS has been concurrently working on HD map solutions. This has led to the development of hybrid HD mapping. This technology combines aerial photogrammetry and MMS data to create high-precision maps. How was the most original mapping solution that has never been attempted before invented? Let's hear the stories from the star players themselves.

Q Why do you work on developing HD maps?

(Hyung Joon Kim | System Software Development) The era of autonomous driving is within reach. In this new era, the first thing we need are HD maps. This is because autonomous driving vehicles need very precise information on each and every lane to drive safely on the road. While it is common to create HD maps with road data collected by mobile mapping system (MMS) vehicles, this approach is time-consuming and costly. As the region grows wider, more resources are required. Therefore, we wanted to find a way to dramatically reduce the required resources. We continued to search for a solution that would create maps for larger urban areas in a faster and more efficient manner, while still maintaining accuracy. As a result, the hybrid HD mapping technology of NAVER LABS was developed. The layout of roads in large areas and building information amongst others were obtained through aerial photographs, which were then combined with data acquired with our own MMS vehicle, R1, to create HD maps. NAVER LABS R1 can create HD maps with minimal driving, dramatically reducing the time and cost required.

(Junho Jeon | Visual Feature Map Development) The completed HD maps contain high-precision information that is essential for autonomous driving on the road. The information includes the road layout map, which is the structural information of the road, and the point cloud map containing geometric information, and the visual feature map that displays visual information.

(Yong-ho Shin | Sensor Calibration) We were able to design and create a new way of the hybrid HD mapping because we had already internalized both autonomous driving and aerial photogrammetry-based mapping technologies.

A distinctive solution for efficient creation of HD maps for cities

Q How did you collaborate during development?

(Jinhan Lee | PM/Software Development) A number of experts from a variety of fields have joined to develop the hybrid HD mapping. The outcome of one project serves as an input for another project under this structure. For example, the development project for the R1 hardware equipment led to the sensor calibration project, while the road layout data became linked to the MMS data. Such organic interdependencies secured the successful development.

(Unghui Lee | Sensor Data Tool Development) NAVER LABS’ internally developed MMS vehicle R1 is equipped with a large number of sensors, including multiple cameras, radars, satellite navigations, and gyroscope sensors. The development of drivers for these individual sensors required our development of a system that simultaneously stores incoming data from all sensors without any data loss as well as an operating software. 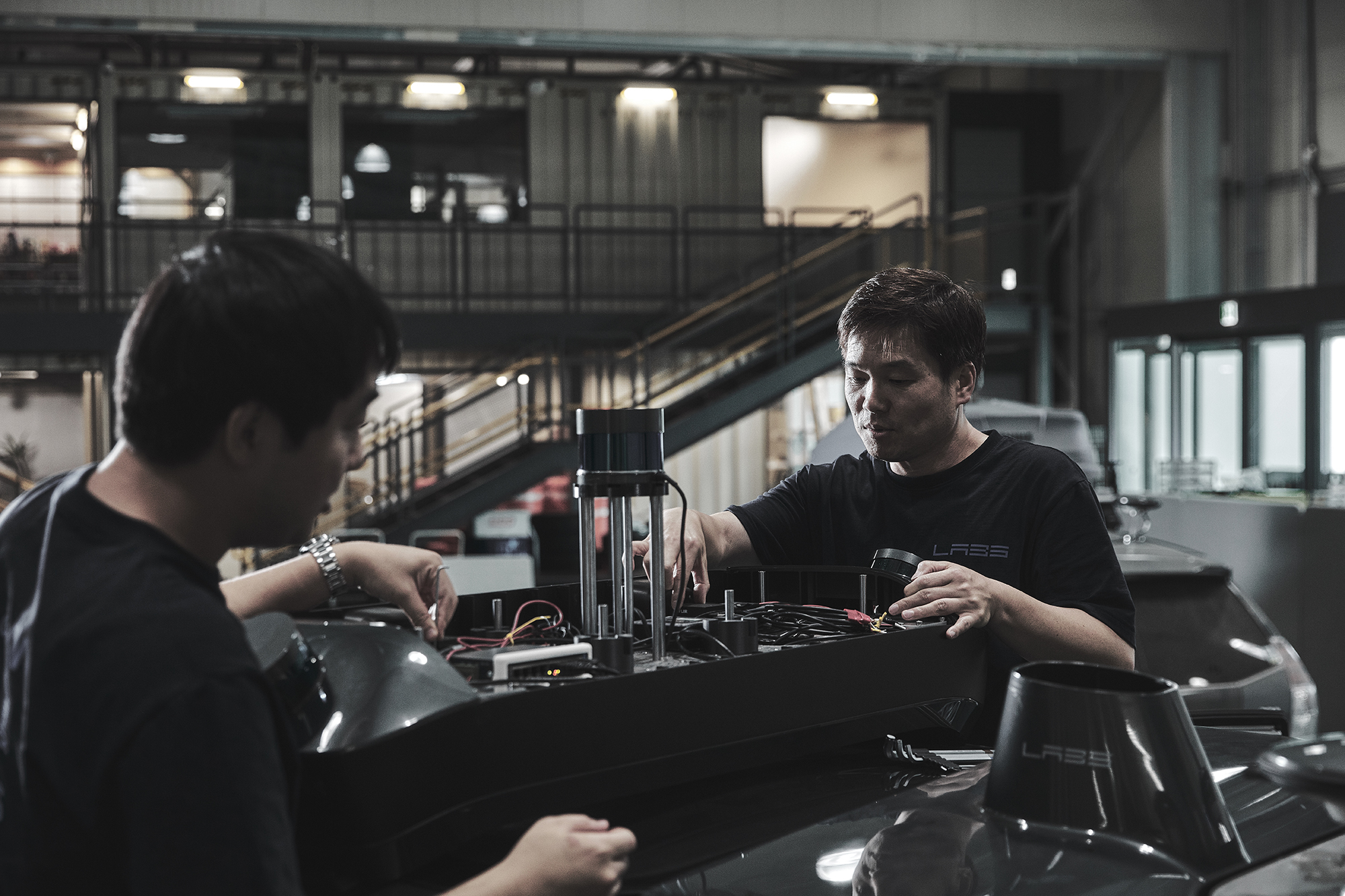 (Jinseok Kim | Aerial Mapping) If the R1 takes care of the ground, we use information captured from the sky. We have developed a way to dramatically improve accuracy through aerial photography. We create vertical true orthophotographs with removed distortions at 8-cm resolutions from aerial photographs, and then create 2D/3D road layouts for the road area. By combining this with the point cloud data collected by the R1, we can rapidly and efficiently create HD maps for large areas.

(Juntaek Lim | LiDAR Feature Map Development) As such, combining the point cloud of roads collected by the R1 and the road layouts for large areas scanned by aircraft is a completely original solution. By all means, just piecing them together does not give out the HD map right away. It is essential to create a deep learning model that deletes unnecessary parts such as vehicles and people from the scanned data and to extract keypoints for vehicles and robots that will use the HD map.

Experts from different fields, but a united team

(Junho Jeon | Visual Feature Map Development) Each group of experts develops the necessary elements of HD maps, such as road layout map/point cloud map/visual feature map, to create HD maps that well reflects these data. The mapping solution has been created through a collaboration among a number of different teams. Experts from a wide variety of fields, such as convergence and recognition of aerial photogrammetric data, the establishment of equipment and sensor systems for data collection by MMS vehicles, location recognition technology using GPS and LiDAR data, and deep learning technology for extracting visual information, are assembled into a team. I believe that this close cooperation under the same objective allows for high-quality research and development.

“Outcomes do matter. However, I believe that the process of defining issues and searching for solutions together as one team is more important. Because that ultimately leads to best outcomes.”

(Hyung Joon Kim | System Software Development) The fact that organic collaboration among experts from various fields is achieved at all times serves as a significant driving force when a project is faced with challenges. Once, an issue arose to the stability of the data acquisition system. Faced with the issue, hardware engineers and software engineers all got together to conduct a joint examination. We went around the field to verify the situation together at the time the issue occurred, and it was the mechanical engineers who found the root cause and solved the issue.

(Sang-jin Kim | Hardware Design) I remember that, too. Intermittent short circuits due to vehicle vibration caused the issue. I believe that the key to finding the most correct solution within a short period of time is, after all, organic teamwork.

(Yong-ho Shin | Sensor Calibration) I would also like to reiterate how well we collaborate as if we are all on the same team. It is a great experience to be able to focus on our work simply under the goal of doing well together.

Q How is the progress, and what about the objective?

(Jinseok Kim | Aerial Mapping) We have completed building a road layout map covering a distance of over 2,000 km of +4-lane roads in Seoul. The road structure information required for autonomous driving (road surface markings such as lane markings, centerlines, stop lines, left turn markings, etc.) has been converted to precise vector data formats. In terms of mapping a large city like Seoul, it is the nation’s only technology. 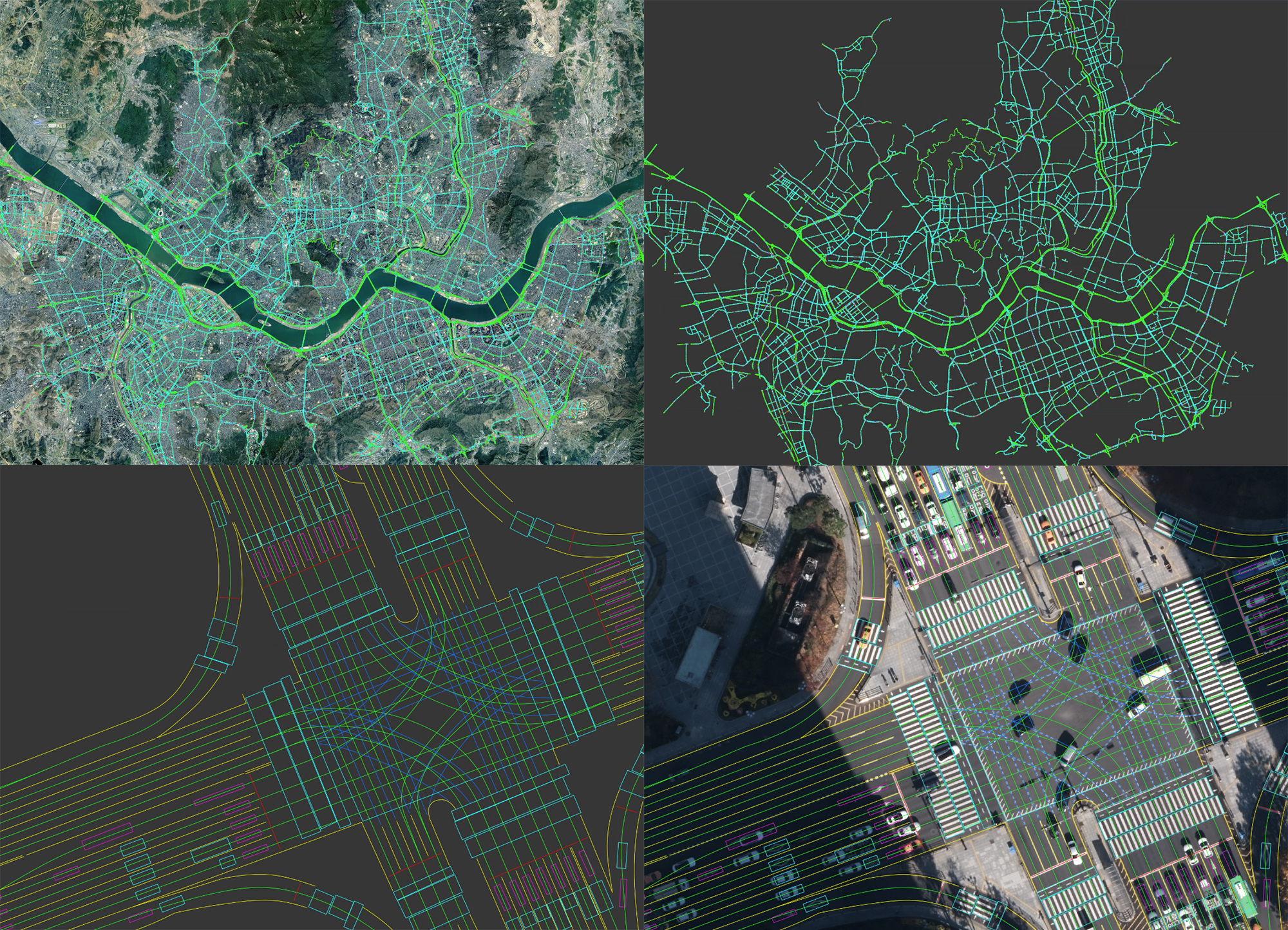 (Hyung Joon Kim | System Software Development) The establishment of our own process for the hybrid HD mapping has allowed us to create HD maps for desired areas with minimal effort compared to before. The freely-disclosed HD maps for Pangyo and Sangam areas also mark the achievement.

(Jinhan Lee | PM/Software Development) It really felt rewarding when DEVIEW announced the free distribution of HD maps for the Sangam/Pangyo areas. Many organizations that conduct research on autonomous driving in Korea applied to obtain the dataset. I hope that our HD maps will further boost the development of autonomous driving technology in Korea.

(Junho Jeon | Visual Feature Map Development) The HD maps of NAVER LABS aim to precise localization on the road. For example, as for the visual feature map, the minimum visual information and geometric information necessary to recognize locations are compressed in the descriptor format, making the size of data for large urban areas very small. We will continue to make similar optimizations.

A step closer to a world of future mobility

(Sang-jin Kim | Hardware Design) The ultimate goal of upgrading the mapping system is to create highly reliable maps. We remain committed to developing various technologies to rapidly improve the reliability/flexibility/operational capacity of hardware systems and implement them at a lower cost. I am confident that as we obtain more research outcomes and collect more high-precision data, we will be able to bring forward the world of future mobility that we have only envisioned before.