In 2017, NAVER LABS first introduced an electric cart called AIRCART, which incorporates wearable robot technology to enhance physical movement by increasing strength and endurance. The cart can be worn by workers who move heavy cargo or by people with physical disabilities, to significantly increase their muscle strength or mobility. To apply this technology in areas where it can benefit people in a day-to-day basis, NAVER LABS applied it to a cart, a tool frequently used by many people. AIRCART can easily transport heavy weights even with a light push. It moves easily up the hill, and returns safely down the hill using an automatic break. 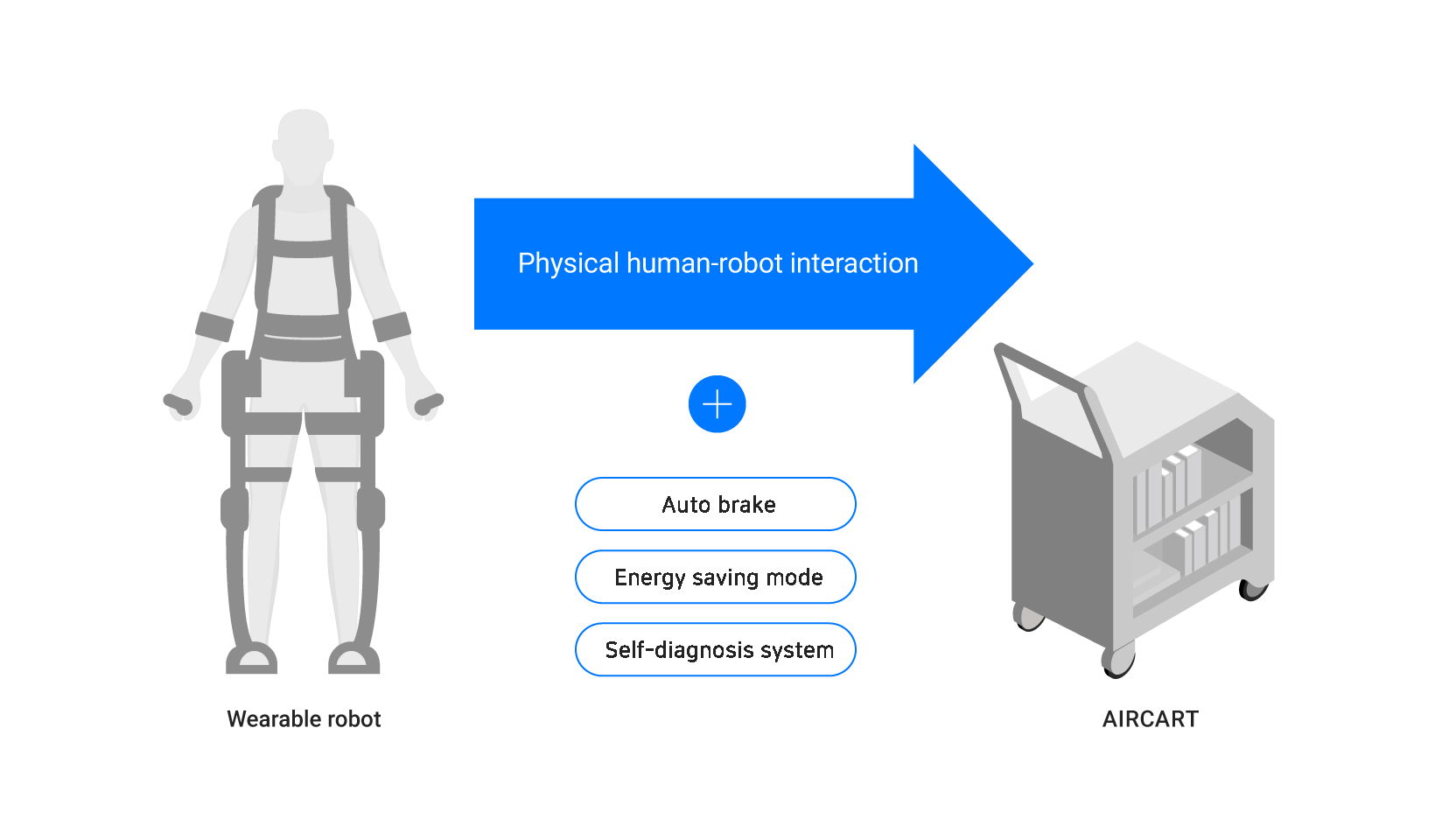 AIRCART has received a lot of attention, not because of the complexity of the technologies implemented on it, but because of its applicability in the real life. A reference model was actually put to use in a book store, which was followed by technological collaborations for commercialization. Last year, the AIRCART OPENKIT, which incorporates the patented technology and design of AIRCART, was accessible to the public for six months while we began working on projects that aimed to apply the AIRCART technology in different areas. This is one of the results of that process, a wheel chair version of AIRCART.

As the society ages, the demand for wheel chairs is increasing every year. One thing that we took notice of was that a large proportion of care givers or guardians of the elderly were also elderly people themselves. Not only that, 40.3% of the people who have used a wheelchair reported having experienced an accident during use (based on the Survey on the Usage Status of Electric Assisting Devices, 2015). These are issues that can be solved by applying the AIRCART technology to wheelchairs.

The AIRCART Wheelchair is equipped with the core technology of AIRCART, that is, physical strength and endurance enhancing technology. It is designed to allow anyone to push the wheelchair easily and safely with a small force regardless of the weight of the person who is on the wheelchair. When going down a slope, often a dangerous situation, it automatically maintains a certain speed so that the person pushing the wheelchair does not have to pull from it to keep it from rolling. In case the person loses hold of the wheelchair, AIRCART breaks automatically and stops.

For this project, we had to think beyond simply enhancing physical strength, because of the nature of wheelchairs, which are something that a person would sit on and push around.

Furthermore, it weighs much less than conventional electric wheelchairs, and has an automatic folding function which allows it to be carried like baggage. It has enhanced safety features for various emergency situations, in addition to the strength enhancement function of AIRCART, such as a vibration prevention and an overturn prevention device. 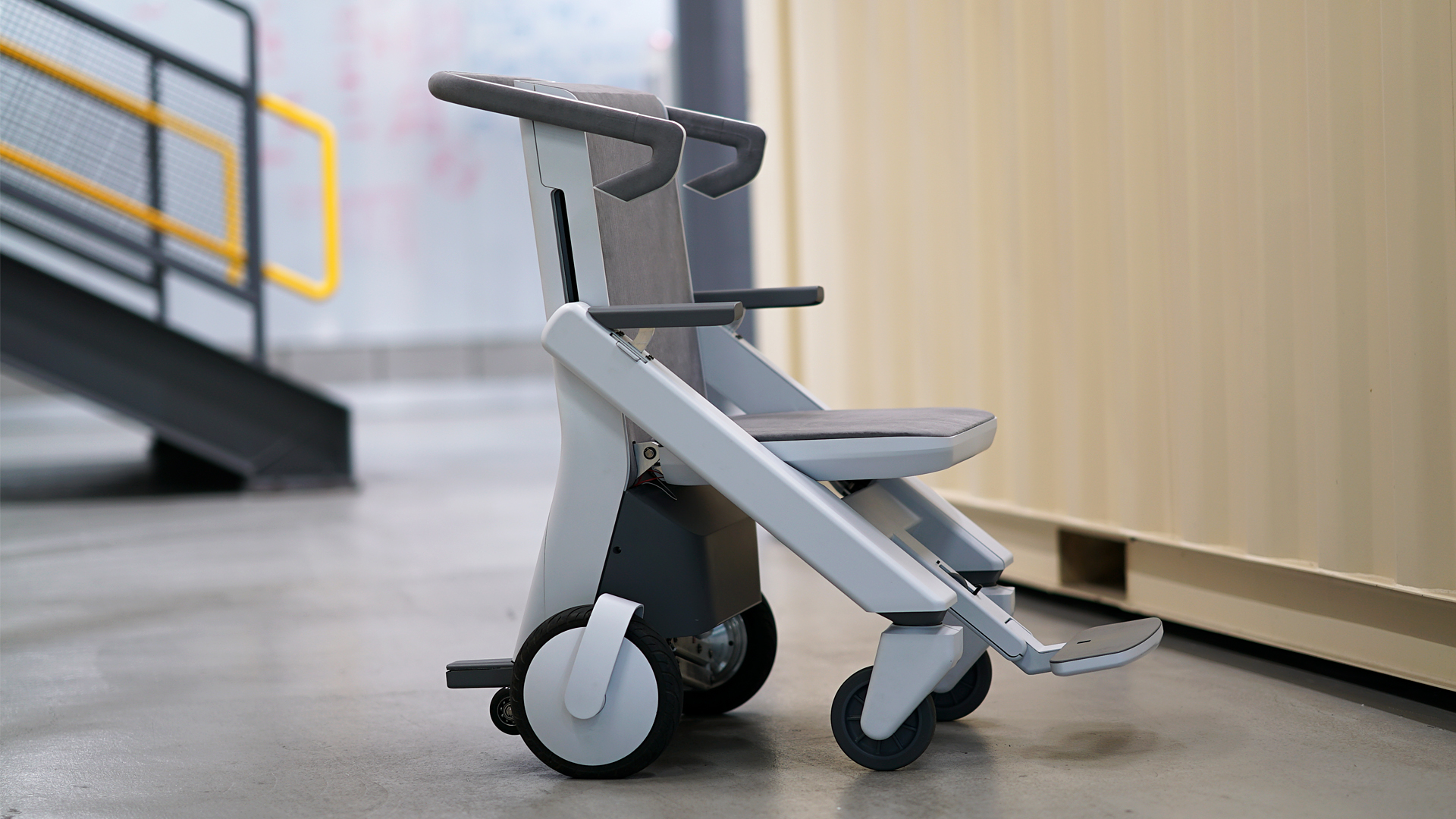 Showcased in the International Conference on Human-Robot Interaction organized by HRI, through a collaboration with the CHIC LAB of Seoul National University’s College of Nursing

This project was the outcome of the 6th group of NAVER LABS interns. The work did not only end in the application of a pre-existing technology to a wheelchair in the lab environment, but it also allowed the interns to collaborate with the Consumer Health Informatics & Communication Lab (CHIC Lab) at Seoul Nation University’s College of Nursing, to discover and improve issues related to the real world applications of this technology. Through this process, the need for light weight, portable, realistic and detailed measures to prevent dangerous situations and issues that can be easily unforeseen, such as going over little bumps, were discovered and properly addressed. On March 12, this project was presented at the ACM/IEEE International Conference on Human-Robot Interaction, where 500 experts share integrated research results on human-robot interaction. It attracted a lot of attention, receiving an award in the Student Design Competition category. This is a technology that seeks to understand people at a deeper level, and solve problems in the real world in the most natural way possible.