You have probably already experienced this a few times: you go to a shop you have not visited in a while and end up having to turn back as it is changed name. In fact, domestic spatial information is said to fluctuate by a degree of more than 30% each year. The world is constantly in flux, even at this very moment. So, in other words, a map that has been recently updated is an accurate map.

If map data management is limited to manual management, the update cycle is slow and production costs are steep. Additionally, maintaining the recency of maps is of major concern for map users, as well as online map service providers. Therefore, developing automation technologies for map updates is crucial. For this cause, researchers at NAVER LABS and NAVER LABS Europe have conducted joint research and developed technology for a "self-updating map.” This technology keeps map information up-to-date by recognizing business names that have changed through analysis of large indoor spatial data which is collected by an autonomous driving robot. To achieve this end, Naver’s core technologies, such as robotics, computer vision, and deep learning, are being utilized.

Automatically updates changes in signboard using AI and a robot

We first conducted tests for this map updating technology with a focus on large shopping malls. Tests were carried out in a space where new stores open and other changes occur frequently. The self-updating map technology picks out only the stores that have changed in a large, complex interior space and contributes data that allows for the automatic and accurate updating of map information.

The entire system is organized as follows. First, the autonomous driving robot moves around and collects images and positional information inside the shopping mall. Then, after some time, we take pictures of the same place again. We compare the map and location information of both images to find the same spot, and determine immediately whether any changes have occurred by using deep learning technologies. We have to be careful about distinguishing whether signs are a storefront or a just an advertisement, because shopping malls are spaces with so much exposed information. 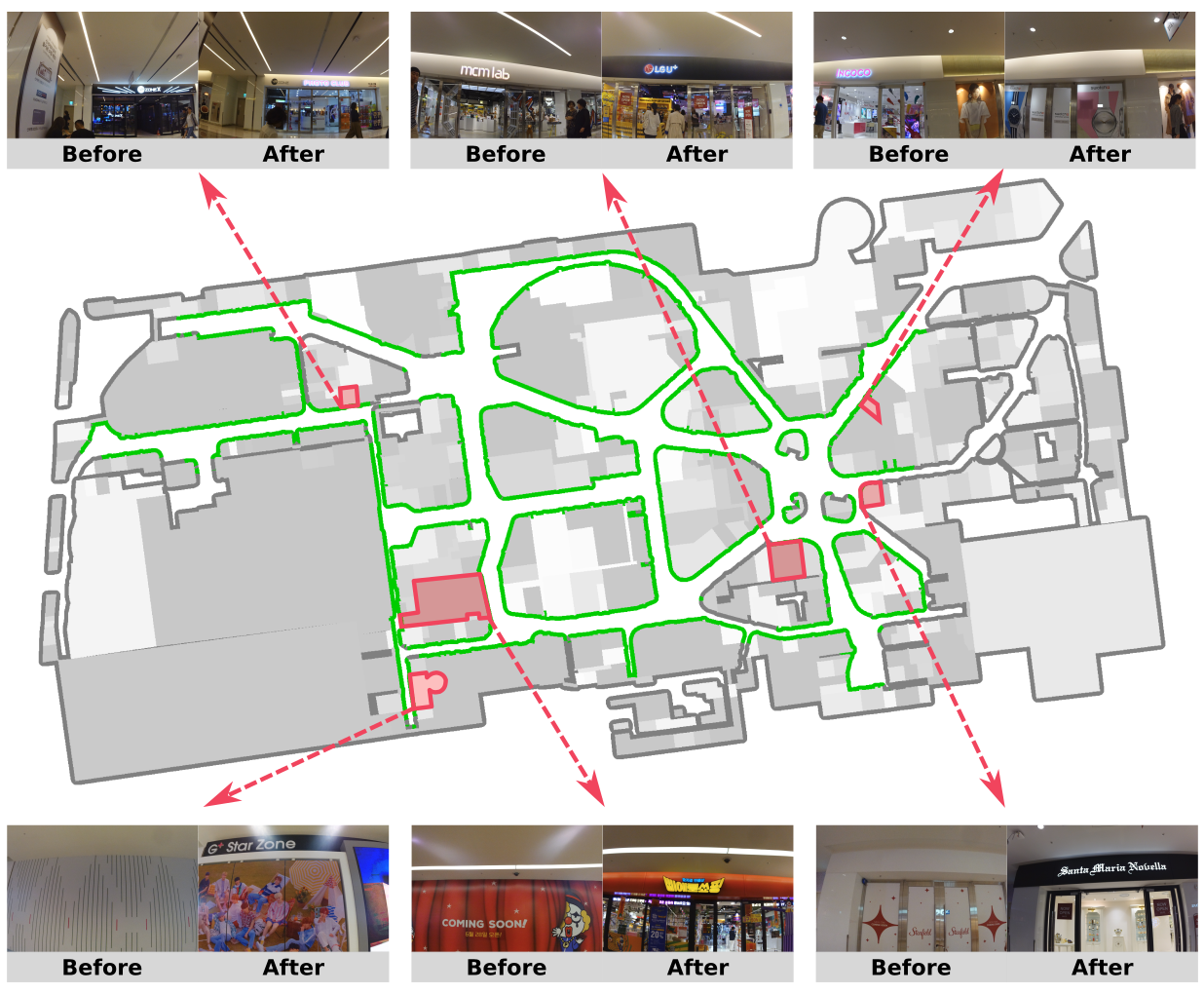 The algorithm that we developed is capable of accurately recognizing when stores open, close, change, or just change their names in each shopping mall, over a period of time. We have verified that it is suitable for efficiently managing large-scale POI information using computer vision and deep learning technology paired with an autonomous driving robot to maintain the recency of indoor map information.

Although autonomous service robots have not yet been popularized, in the near future many people will live in spaces where they interact with robots frequently. Those robots will be able to provide a variety of services including item delivery, security, and guidance, while simultaneously keeping indoor map information up-to-date by utilizing our self-updating map technology.

The outcome of joint research between NAVER LABS and NAVER LABS Europe, to be presented at CVPR

This technology was jointly developed by researchers at NAVER LABS and NAVER LABS Europe over a period of one year. The results of this research will be presented at the Conference on Computer Vision and Pattern Recognition (CVPR) which is being held in California, USA this coming June, under the title of “Did it change? Learning to detect point-of-interest changes for proactive map updates.”

We will be able to attempt a variety of projects in the future based on these results. We can try either to reflect various spatial data such as sales information, other than just business names changes, in real time on a map, or try to recognize and update spatial information changes on roads, i.e. non-indoor spaces. The world is constantly in flux, changing at this very moment. However, technologies are also constantly being developed: technology that will allow us to catch up with these changes.