The kind of talent NAVER LABS seeks is a passionate self-motivated team player. Perhaps the term, “a self-motivated team player,” is an oxymoron. Even still, we have continued to venture out and the culture continues to snowball. We present the stories of experts in various fields cooperating without boundaries, making decisions on their own and taking on challenges together. Here is how to work at NAVER LABS.

Digitalizing spatial data, or “high-precision mapping,” is a task of utmost importance for NAVER LABS, and it is from such a task that the technologies of NAVER LABS emerge. NAVER LABS’s COMET project aims to research mapping technologies in complex topography difficult for mapping robots and mobile mapping system (MMS) vehicles to access, and to develop and set the standards for NAVER LABS mapping devices. Prior to this project, there were many attempts and failures. Surely, we can expect to bear fruit after overcoming such failures, albeit difficult reaping the benefits of hard work. Certain conditions and situations do not allow that to happen easily, and it is easy to become weary since we are human after all. That is why we have grown more curious about the COMET Team. We have listened to their stories on the events that they have encountered and experienced. 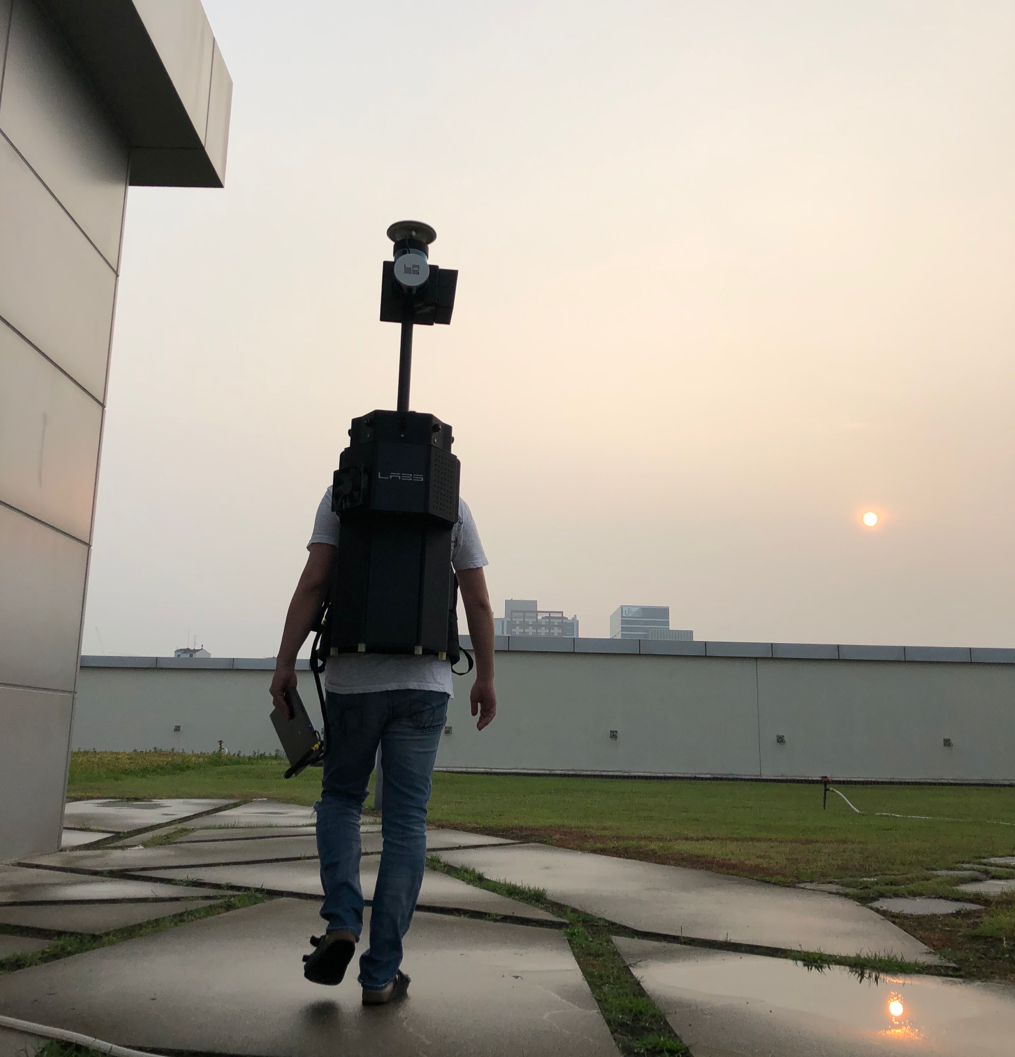 Q. What kind of project is COMET?

(Eungyo Jung | TL) Development of mapping devices in the past concerned mostly fixed types or was limited to specific topography. However, COMET was predicated on the premise that data collection needs to be enabled for mapping devices regardless of the geographic features not only for indoor environments and roads which are standardized places, but also uneven sidewalks, stairs and winding hiking trails. High-precision data must be able to be collected no matter what the topographic features are, which is why we began first with a backpack-type design.

The project name definitively signifies the project as a whole.

(Seong-jun Lee | PM) That’s why we named this project, COMET. In space, there are not just planets that move according to specific orbits, but also comets that penetrate these orbits. The COMET project takes its place in between the two technologies of NAVER LABS: M1, the indoor mapping robot, and R1, the mobile road mapping system. It connects all the spaces that have been tough to cover up until now.

(Sungyong Chung | Hardware/Firmware Design) There were actually several other projects with different concepts but they were put to a halt because unexpected variables both internally and externally, There was even a project that was near completion. All the drive and passion that I had nearly disappeared at the time, but I remember Seong-jun proposing the COMET project by saying, "Let's paint a stroke resembling a comet in the company's history for one last time." That’s the meaning behind the name, don’t you agree?

“The core concept of COMET is seamlessly connecting the areas that have been difficult to access with high-precision mapping devices in the past. There is already a sufficient number of solutions for roads or indoor sidewalks where the movement environment is relatively uniform. However, there are still many complex topographic features and areas for which it is tough to make high-precision maps. Being able to seamlessly connect the spatial data in those areas through COMET is the greatest accomplishment."

Q. How did your team utilize failures?

A process is needed to make even a failure an asset

(Seong-jun Lee | PM) We've learned many things from various attempts and failures prior to COMET, and they’ve become assets for the project. Even if a project is halted, everything that has been accumulated should not disappear. That's why we wanted to establish a process in order to turn experiences and know-how we’ve gained through each project into assets. An overarching framework was set up first, and each step proceeded in design sprints. The fact that we could visually see how far we've come so far has also helped us greatly.

Every ending is connected to a new beginning

(JungHoon Cheon | Programming/Hardware Design) The information of all projects that have been carried out is organized and made public. I was also able to raise the speed of development by referring to previous solutions. I considered such an act of organization critical because I believed that COMET is not the end but a step that leads to the next project. We put much consideration into technologies that may be utilized in future projects. For instance, we design efficient collection protocols for various sensor data based on an assumption that they would be utilized in the next projects, or apply the firmware update feature of the circuit board to prepare for expandability in advance.

What happens when a process works

(Sungyong Chung | Hardware/Firmware Design) I, as well, actually thought that COMET wasn't going to be finished. It wasn't because of technical difficulties; I just believed that it would be tough for this project to end in a stable manner in the midst of changes in the company leadership and roadmap this year. But, thanks to the experiences accumulated up until now, a solid process that was made based on them began to work, and we were able to reach completion faster than anyone's expectation. It was really an incredible reduction of time. Of course, each day was a challenge and a crisis during development.

Going beyond the concept and boundaries of the “person in charge”

(JungHoon Cheon | Programming/Hardware Design) Of course, there are objectives that each individual must achieve, and these things are normally quite clear. But individuals only accomplishing their own goals doesn't mean that the project will go well. Instead of merely waiting for the responsibilities of or completion by other people in charge, we led things ourselves if it was deemed necessary in order to think and communicate with one another. The fact that we can visit experts in different areas regardless of which teams they are on and comfortably discuss issues to solve is definitely a strength of the organizational culture at NAVER LABS. We were able to resolve our concerns any and every time they occurred thanks to an atmosphere in which feedback can be shared easily with anyone at any time. 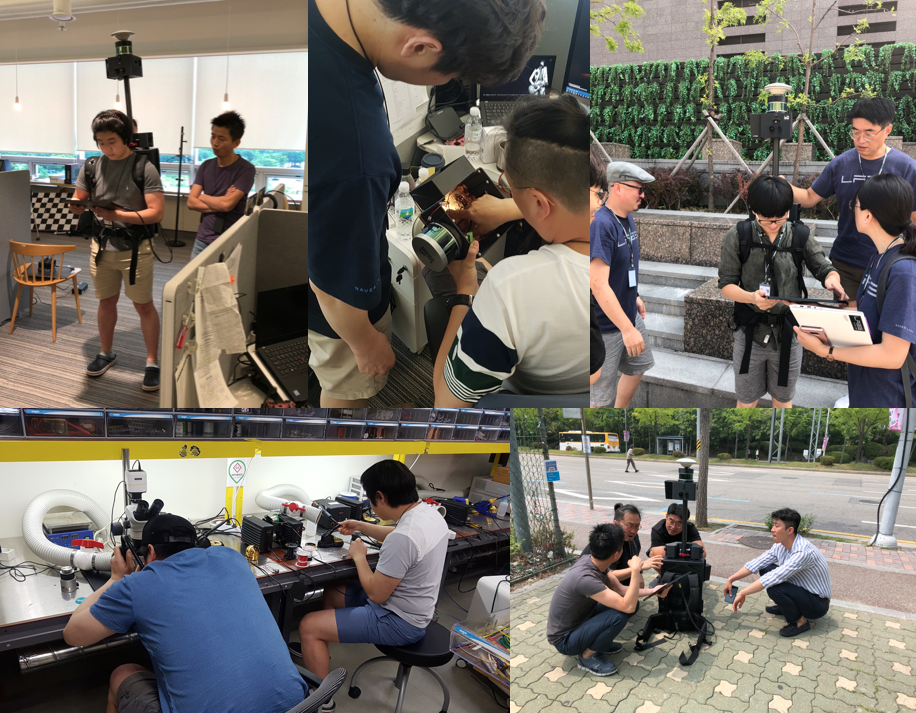 A real expert-like cooperation among experts

(Munyong Choi | GPS Hardware Design) There was a time when the GPS reception of COMET came out worse than expected. When that happens, experts in hardware, software and GPS algorithm all come together. Based on each of these areas of their expertise, we observe and discuss in a variety of ways, and find effective countermeasures, after which Mechanical R&D engineers make the necessary applications right away. As a result, we were able to raise the performance level up to reach our expectations. I get chills just observing it! The level of expertise of the entire team has been enhanced through cooperation without having to set boundaries among each other’s tasks.

(Sungyong Chung | Hardware/Firmware design) In reality, we don’t divide up areas among one another, and instead freely go beyond and cross domains. Persons in charge are defined, but that doesn’t mean that development and decision-making are only performed by those persons in charge. If deemed necessary, anyone can draw a circuit, write code, design an equipment or establish a project plan.

(Jaeryang Lee | Mechanical engineering design) Of course, realistically speaking, disputes can’t not arise. Sometimes there are really heated debates when there are differences in opinions, and we frequently become temperamental and get into arguments (not me, however). But, in the end, we all reach a better conclusion every time. The fact that anyone can freely express his or her opinions and get into a debate is an extremely important element contributing to the degree of completeness of a project because, at the end of the day, they are outstanding experts in their respective fields.

“What would be a strength of free communication among team members with expertise? It is the fact that individuals’ responsible domains overlap, and soon enough, leading to the disappearance of the boundaries of “my problem” and “your problem.” I think it was possible because of the efforts to genuinely acknowledge the expertise of one another, and to be interested in and understand other people’s fields. Now, we jokingly say that, even if we decide for the next project what each person is going to be in charge of by a game of ghost leg (ladder lottery), the project will indubitably go smoothly.”

Q. What are the goals heading forth?

(Eungyo Jung | TL) As mentioned earlier, the COMET project aimed to collect high-precision spatial data in a variety of topographic features, and having successfully made it possible is the biggest achievement. Through this project, we experienced and solved a wide spectrum of issues and side effects that came from combinations of sensors. Based on such information and know-how, we are preparing to standardize NAVER LABS’s mapping devices. That’s how we will be able to quickly and efficiently deal with many other mapping projects to come in the future.

(Seongjun Lee | PM) Actually, COMET is not an end in itself. We are going to increase the actual hours and environment for operation to test it, and find new points to improve on. Through this process, we will be able to develop it into an expandable system that may be applied to more diverse environments and machines.

(Jaeryang Lee | Mechanical engineering design) At first, things were tough even from the initial concept stage because of the fact that we have to develop a type we had never tried before. But, now, we continue to review new materials and structures, and conduct tests for upgrades. Please look forward to COMET which will continue to see new version updates.

Preparing a solid foundation not to lose assets of the past

(Sungyong Chung | Hardware/Firmware design) I think the biggest element we’ve ultimately gained from COMET is the fact that we are making our own mapping device standards. From now on, all the mapping devices that will be developed by NAVER LABS will be based on COMET regardless of the form or purpose. Now, we do away with the method in which concepts are newly designed every time the direction of a project changes, and instead, mapping devices of the most effective means can be produced while not losing any of the assets we’ve accumulated thus far. I believe that the failures of the past were necessary for these outcomes.