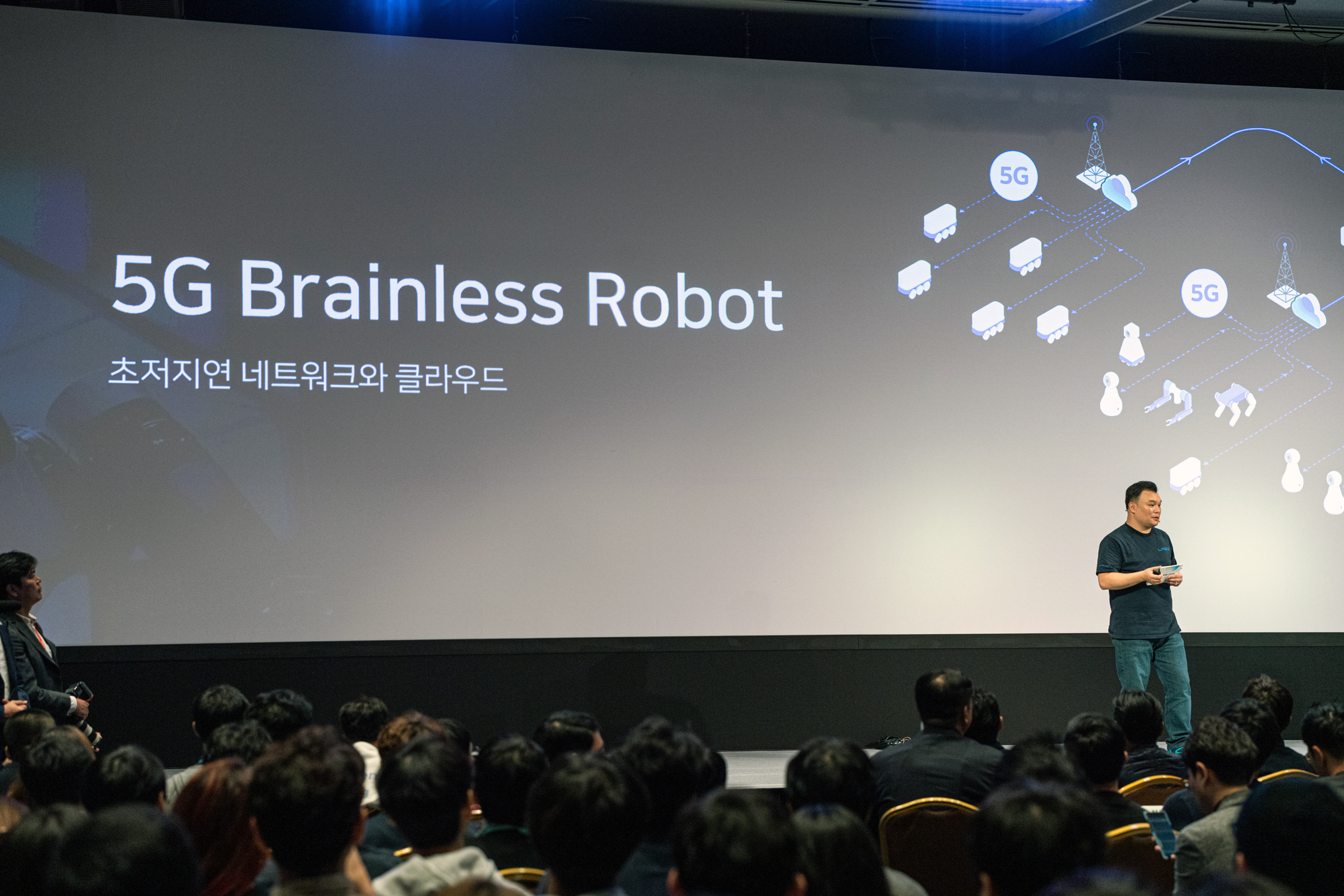 At DEVIEW 2019, NAVER LABS gave a keynote presentation and unveiled its company roadmap. Starting by introducing the MIT Mini Cheetah workshop, the keynote presentation introduced and discussed the company’s progress in various researches, including HR mapping, visual localization (VL), indoor AR navigation, 5G brainless robot, the service robot platform, autonomous driving, and human-robot interaction (HRI), in addition to new announcements. The following is a summary of the keynote largely focusing on the new announcements for those who could make it to the event.

We made it clear that the ultimate goal of our projects was to create A-CITY. A-CITY represents an urban area where each space in the city center is tightly connected to each other through various autonomous machines, with services such as delivery and logistics being fully automated.

A project integral to the roadmap of A-CITY was first made public during this keynote. The “1784 Project” will convert the second company building of NAVER into a tech convergence building. Each and every technology that will shape the future of NAVER concerning robots, autonomous machines, AI, cloud computing and the like will be integrated and connected. 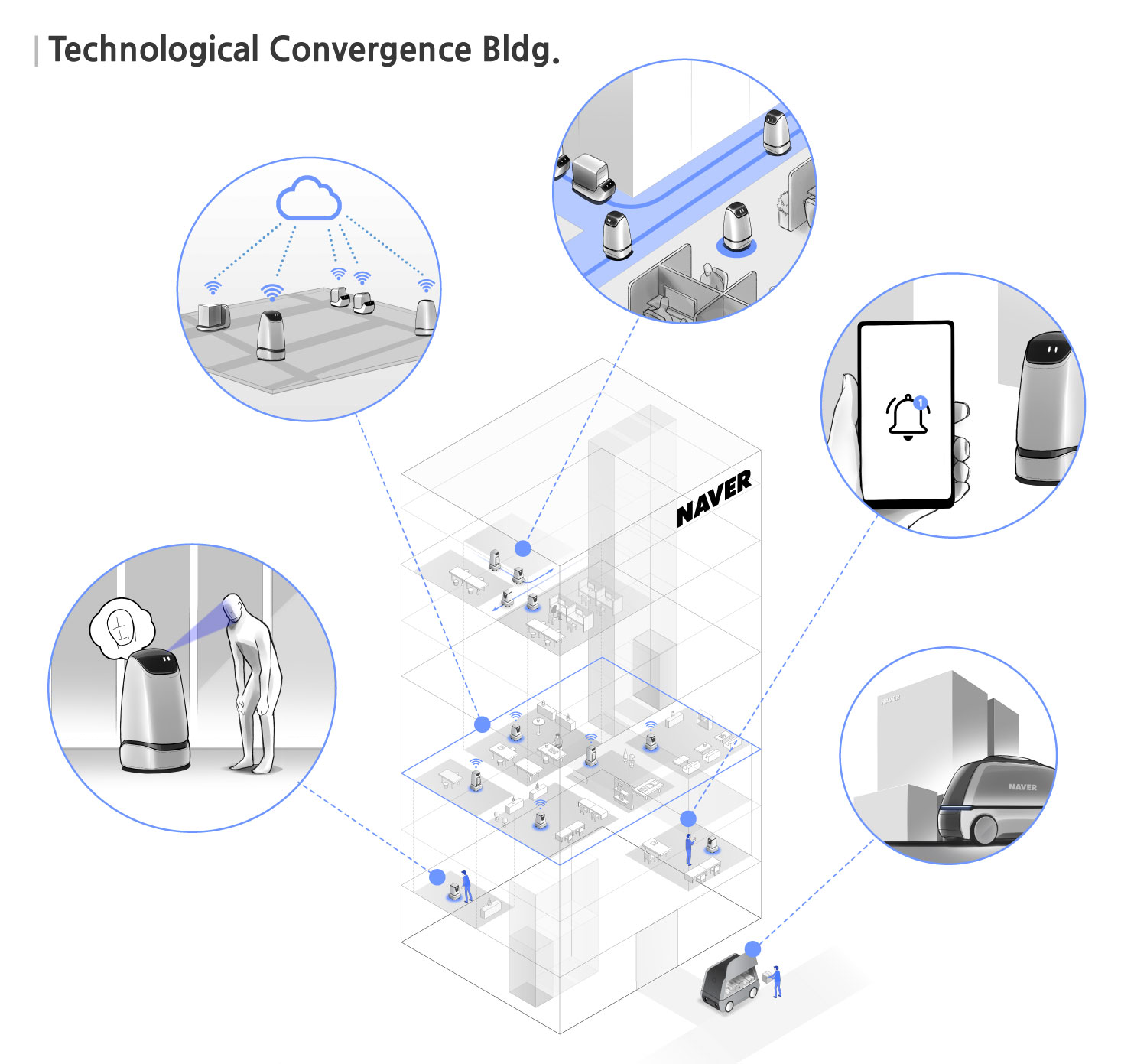 “This place will be filled with the most human-friendly robots developed by NAVER LABS, and the building will be designed to contain optimal infrastructure to be a robot-friendly building in order to maximize the robots’ functions and the service experience,” said CEO Sangok Seok during his keynote speech. He further emphasized that “the goal [of NAVER LABS] is to implement the true first generation of service robots in this space.” The second company building of NAVER will serve as the most effective accelerator for the technical advancement of NAVER LABS.

To delineate the first stage of the roadmap for A-CITY, it begins with creating high precision maps for machines to use anytime, anywhere. This keynote speech was no different. NAVER LABS creates high-precision maps with the M1 mapping robot for indoor space, COMET for stairs and complex terrains, and hybrid HD mapping technologies that converge R1 with aerial photogrammetric data for roads.

There was also a new announcement relevant to this: a plan to distribute the data of HD maps for roads free of charge, the first among private companies in Korea to do so. NAVER LABS will provide the dataset created with its hybrid HD mapping technology to domestic startups and researchers studying autonomous machines, and plans to continuously expand on the regions and types of data.

ALT Platform, Robots on the Road 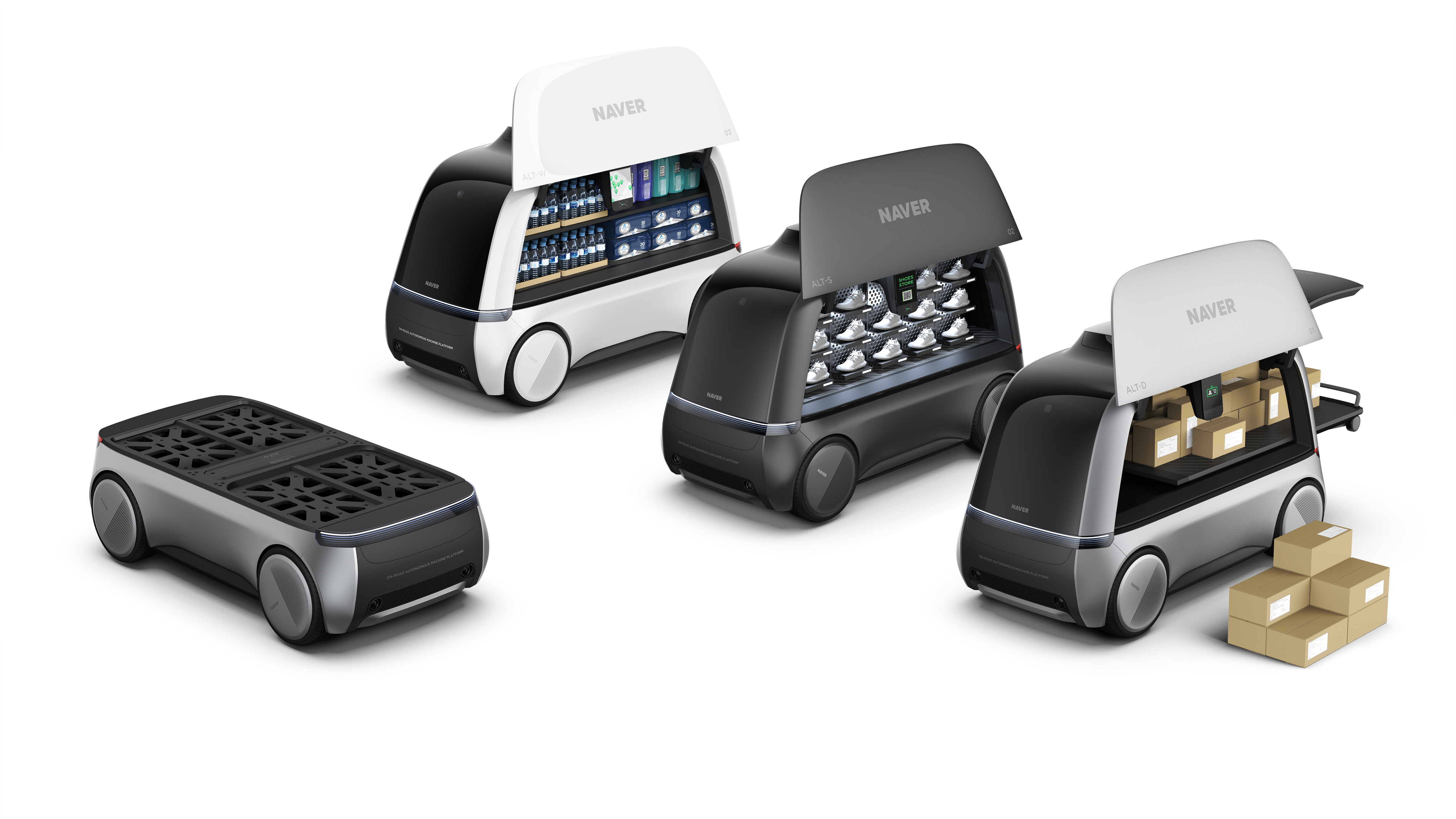 ALT is a platform for autonomous robots on the road. It can be explained as the road-version of “AROUND,” an indoor autonomous robot service platform that NAVER LABS had previously developed. Autonomous service technologies for roads and the high-precision data will be packaged as ALT-0, the general basis for this platform, and a custom-made version combined with various service scenarios through pilot tests will be demonstrated. Our ultimate goal is to integrate it with the AROUND platform, which will be connected to each and every space. AROUND and ALT are the key platforms for machines connecting all spaces within A-CITY.

Synergy from Cooperation, and Nurturing Talents

Even though this keynote was held to unfold the progress of NAVER LABS’s technology roadmap, it also contained two important keywords: cooperation and talent.

The demonstration of the MIT Mini Cheetah at the outset of the keynote was aimed at showing the hidden potential of the four-legged robot hardware unlocked by AI researchers across the world, while the distribution of the HD map dataset was decidedly made public for the mutual growth of domestic autonomous technologies. The “1784 Project” will converge future technologies of each organization within NAVER to realize new potentials. As such, we are maintaining our focus on the synergy created by technological connections. We are also well aware that nurturing talent is crucial to maximizing synergy. A new plan by NAVER called the Global AI Research Belt was presented at the end of the keynote.

The Global AI Research Belt refers to a new technological network of connecting AI researchers of Korea/Japan/France/Southeast Asia with startups and agencies. The plan is to support leading researchers worldwide so that they can easily interact and cooperate with each other and to continue making investments in nurturing new talents through this network. By the end of this coming November, the Global AI Research Belt is scheduled to take off at the “AI for Robotics” workshop, where leading scholars in the fields of AI and robotics will gather at NAVER LABS Europe in Grenoble, France to engage in in-depth discussions.

It is true that American and Chinese companies are currently leading the trend in AI development, but our goal is to create a new tide that is comparable if not competitive. CEO Sangok Seok wrapped up the keynote expressing his expectations saying, “I look forward to seeing Korea's outstanding talents freely crossing borders within the Global AI Research Belt to continue technological cooperation and seize the opportunity to achieve further technological growth.”