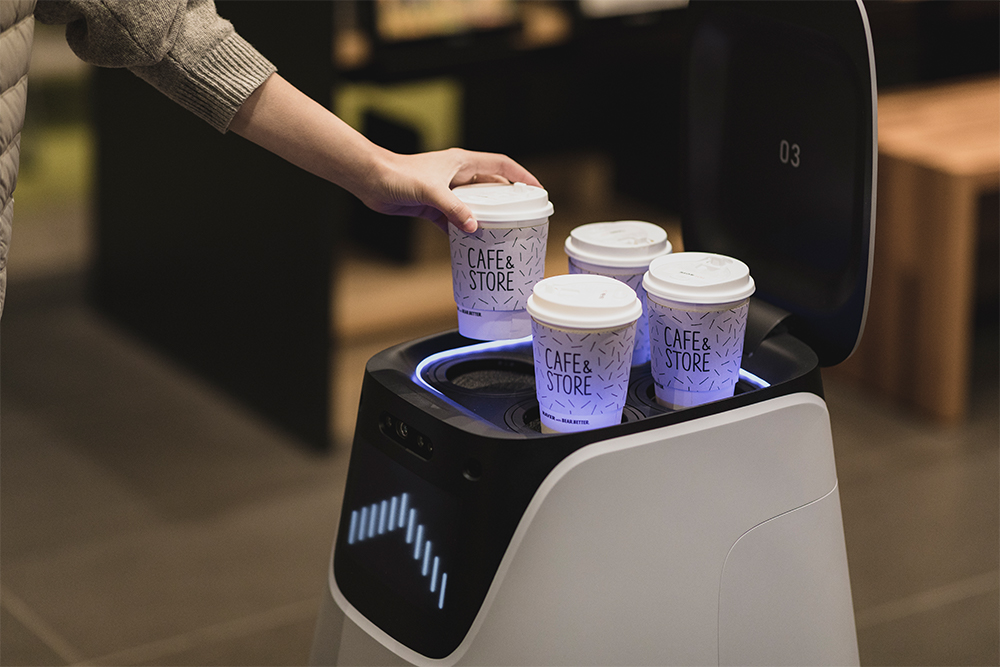 Serving refreshing drinks from the bartender to your table safe and sound might seem like a simple and menial task, but robots must be able to overcome numerous obstacles, understand their surroundings, and communicate their intentions. Moreover, even if they succeed in carrying out particular tasks, their services will not be sustainable if customers feel uncomfortable with robots altogether during the process. In order for more robot services to enter spaces of daily interaction and habitation, we need to first consider and identify the ways in which robots interact with humans.

NAVER LABS developed AROUND C, a cafe delivery robot, to primarily identify the ways in which human-robot interaction (HRI) is conducted. A team of UX designers, robotics engineers and product designers for AROUND C defined the following principles for robots: 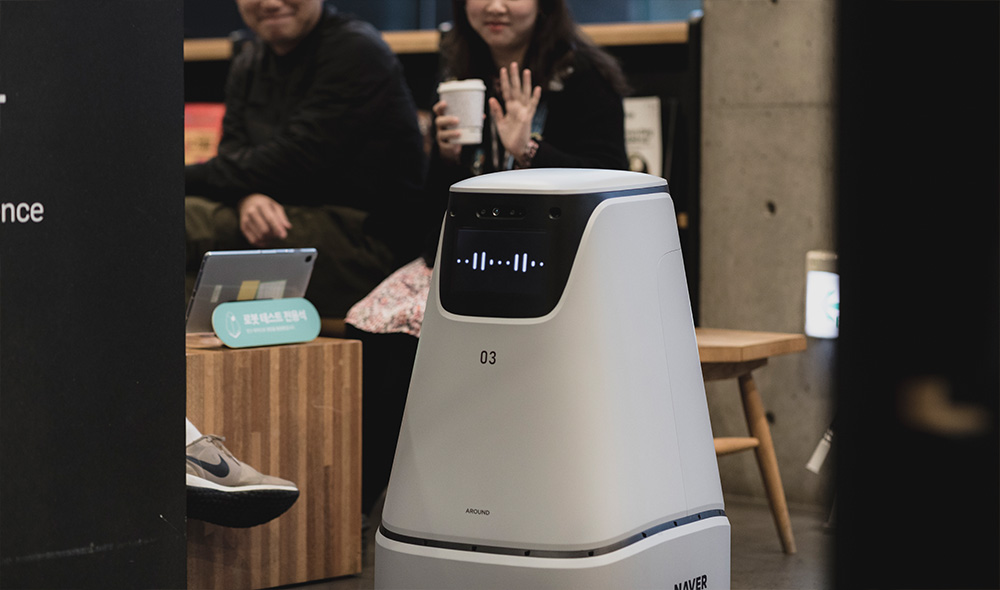 Robots, first and foremost, must operate safely.
- Must not cause physical harm, such as collisions.
- Move along paths with the least risk of accidents.
- Be able to stop immediately when incident occurs.
- Give warning signals in case of danger.

Robots shall provide the most efficient service.
- Move at and in the most economical speed and path.
- Be able to comprehend quickly without mistakes or difficulties .

Robots must be approachable, human-friendly and safe when in the same space as people.
- Keep a safe distance from people so as to not feel threatening.
- Be able to let users know their operating status and the direction of progress.
- Operate smoothly and refrain from behaviors that cause anxiety and discomfort.
- Be made with an approachable and human-friendly appearance and not cause fear.
- Communicate calmly and smoothly.

Robots shall communicate naturally to avoid the sense of foreignness.
- Be made to operate in harmony with everyday space due to the closer resemblance to machines than humans.
- Communicate nonverbally via facial expressions, sounds, lights, etc. instead of verbally via speech and text.
- Refrain from being overly sociable, and interact only when needed so as not to disturb humans.
- Use expressions that are not irritating even after repeatedly used. 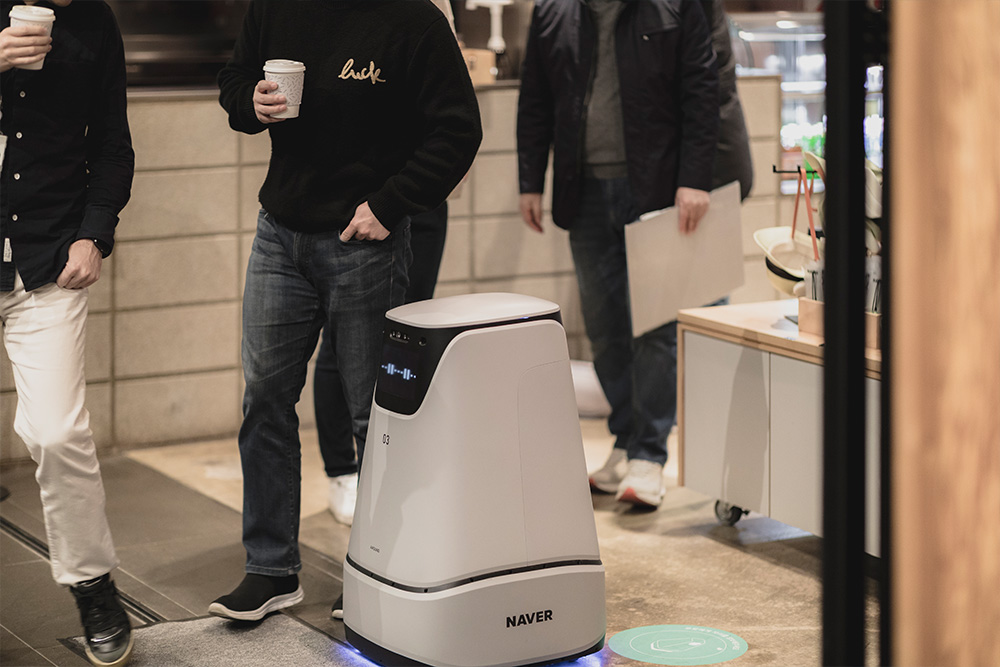 Robots, in short, shall operate naturally without being dangerous

Human Friendly Navigation via Reinforcement Learning
Robots must move safely and efficiently even in complex spaces of daily interaction and habitation with many people and obstacles. Moreover, people sharing the same space with robots should feel comfortable with robots. AROUND C is equipped with the technology that uses reinforcement learning to move naturally while maintaining psychologically safe distances (proximity) with humans. When an HRI designer selects the most ideal speed and route according to certain situations, AROUND C can apply its deep learning technology for optimized autonomous driving.

“The autonomous driving method of AROUND C, based on reinforcement learning reflecting people’s preferences, moves at a speed similar to that of actual people walking in real-world environments and smoothly even when avoiding obstacles, and slows down to keep a safe distance when it detects a person nearby. Even if it can avoid obstacles with greater probability, it should still not appear dangerous to people.”
(Choi Jin-yeong, Robotics)

Nonverbal Communication via Facial Expressions, Sounds and Lights
AROUND C uses a fluid and smooth method of nonverbal communication via facial expressions, sounds and lights. The core aspect of robot design is more about robots being able to engage in appropriate and comfortable communication and less about robots being conversational objects. AROUND C can express various modes and states via facial expressions such as by its gaze to indicate its direction of movement which is essential for its services. To do this, NAVER LABS has chosen graphics of points and lines instead of just two eyeballs so that the method of expression and communication of AROUND C can smoothly and naturally change in many ways.

“AROUND C is designed with a calm and polite personality. Rather than actively talking or expressing its emotions, it moves around with a calm expression and politely says ‘Thank you’ after delivering a drink. The facial expressions, sounds and lights that AROUND C can make reveal its personality, and we are still working to make it more approachable for those who stay away from robots.”
(Cha Se-jin, UX)

AROUND C was designed as a cafe delivery robot, but it is not intended for commercial use as a service robot in cafes; rather, AROUND C is a pilot model for empirical research on HRI currently being conducted by NAVER LABS. The goal of this experiment is to test the hypotheses of various user interaction scenarios in a real environment, and to obtain optimal algorithms. Of course, it is also important to see the actual–unexpected–results in real-world applications directly since the real world is full of variables, especially for robots. 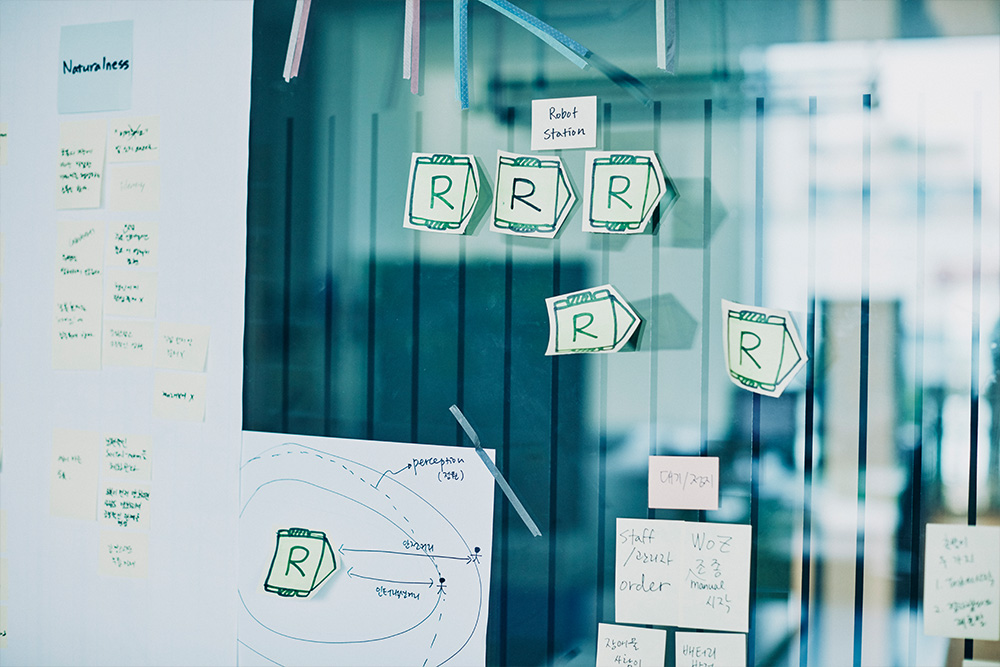