When we announced our 5G robot technology at CES 2019, many people assumed that the demonstration would be remote control-based, which is quite a cool piece of technology, in and of itself. However, NAVER LABS has, in collaboration with Qualcomm, gone a step further to tackle a more challenging project, known as the “5G Brainless Robot.” 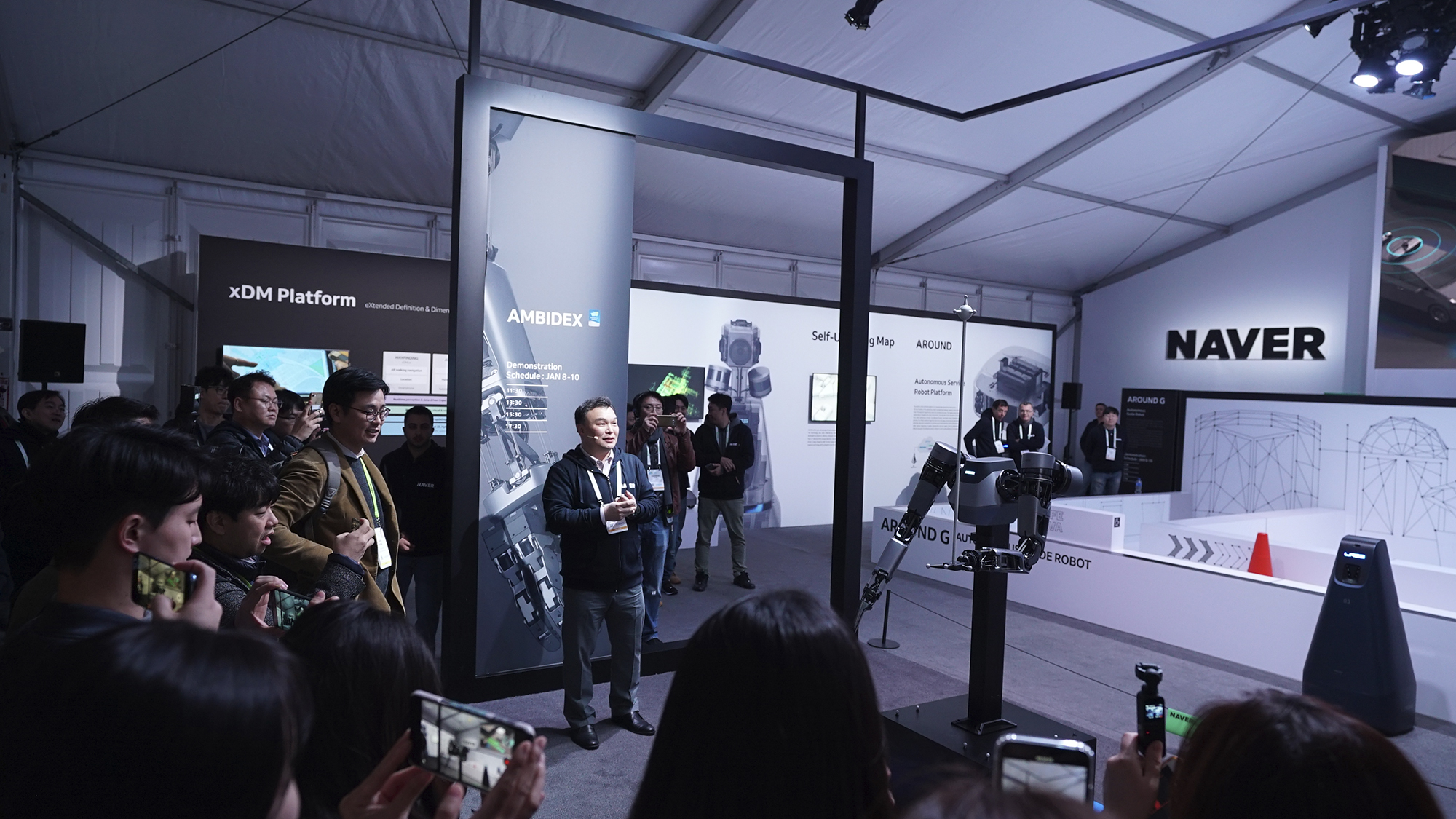 In essence, this technology takes the high-performance computer, functioning as the brain of a self-operating robot, out of the main body of the robot. Despite the initial unfamiliarity of the idea, everyone, at one point or another, will have witnessed something similar in sci-fi films. In the movie, Avengers, for instance, it might not have felt so strange to see the cyborg Chitauri warriors collapse in tandem upon the destruction of the mothership. This idea, in fact, captures the basic essence of what brainless robot technology is.

The minute decision-making that empowers the cyborgs to attack Hulk or thwart Thor’s assault are all formulated within the mothership and delivered via a wireless network – most likely 5G or higher. Had the telecommunications been 3G or 4G, a cyborg would have no choice but to helplessly take the full brunt of Captain America’s punches due to the inability to avoid them on account of signal latency, even following the recognition of an imminent attack and the delivery of a command in response.

Latency simply refers to the time required to give and react to a command. 5G is an ultra-reliable and low-latency communications technology with a latency of merely one millisecond, i.e. 0.001 seconds. It is one of the core technological features of 5G that is attracting significant attention.

The ultra-reliable and low-latency characteristics of 5G being applied in a robot’s control cycles can enable some very fascinating possibilities (a control cycle denotes the time required to process signals collected by a sensor and deliver them to a motor). Many humanoid-type robots are typically constituted of more than 100 sensors and 30 motors, and the average cycle, during which data collected from sensors is processed prior to the delivery of commands to a motor, is about 5 milliseconds. However, the latency of 5G communications is a mere 1 millisecond, shorter than that of the control cycle. Thus, it becomes possible to connect a high-performance robot for posture and movement control via communications technology to an outside “brain,” instead of integrating it within the robot. This essentially means that an MEC server, or a 5G Cloud connection, may serve the role of a robot’s brain to actualize a brainless robot.

NAVER LAB’s 5G brainless robot technology garnered significant attention at this year’s CES thanks to the successful achievement of high-performance robot control utilizing 5G’s ultra-reliable and low-latency features. Theoretically, it may sound easy, but 5G technology is an area that has yet to be thoroughly explored. In particular, a robot’s high-precision control through a 5G connection is established via countless signals and processing data going back and forth, making its degree of difficulty extremely high.

Looking at the pole-balancing demonstration of the robot arm, AMBIDEX, numerous commands to detect a pole with a tilting center of mass while adjusting the arm’s balance are repeatedly delivered through the 5G network. Setting technical difficulties aside, what kinds of possibilities could this technology then be able to provide us with in real life?

Members of NAVER LAB’s Robotics Team actively dedicate themselves to the research of robots that ultimately provide services to people. The majority of such robots require the installation of high-performance computers inside the main body frame, which sounds, and actually is, expensive. This is exactly why reducing the cost of production is a prerequisite for the popularization of robots; hence, the Cloud-based service robot platform being a viable solution (NAVER LAB’s AROUND platform, which conducts self-driving indoors based on a map cloud produced by a mapping robot named “M1,” was developed under a similar context).

If the ultra-reliable and low-latency performance of 5G is utilized, however, it is possible to separate the processor from the robot, up to the domain that corresponds to a robot’s cerebrum, which requires a significant amount of processing power. Since an external server can control a number of robots simultaneously, each robot does not need to have a high-performance processor embedded inside of it, thereby reducing production and maintenance costs. The reason being is that the cloud can integrate and analyze data collected by several robots, and then conveniently update itself via a newly-learned algorithm.

Furthermore, the power consumption of robots would become that much more efficient. The main computer of a robot consumes far too much battery power, similar to that of about 20% of the human body’s entire energy use being devoted to neural activity. The percentage of energy consumed by the main computer can go as high as 40% for self-driving robots. In other words, simply making the high-performance processor external would lead to a remarkable decrease in battery consumption. In fact, the battery charging period acts as a key factor in service robot usage.

There is yet another interesting advantage. Would it now be possible to create a small robot with a high-performance computer? In the past, only a small-sized computer could be embedded in a small robot, due to physical limitations; however, if the cloud serves in the role of the robot’s brain, this would open up the possibility of creating super-intelligent robots, regardless of size.

NAVER LABS conducts research in ambient intelligence technology that can reconcile with the physical spaces in which people dwell, while naturally providing information and services. Service robots are a core platform to achieve this, highlighting 5G and Cloud technology’s importance in the popularization of these service robots.

CES 2019 provided a platform for the competent and proud engineers of NAVER LABS and Qualcomm to successfully conduct the challenging task of demonstrating the functionality of the world’s first-ever 5G brainless robot. Also, at MWG19, NAVER LABS agreed to commence collaborative efforts in 5G-based service robot development with KT, Intel, and NAVER Business Platform. The goal is to develop service robots by utilizing various 5G solutions offered by Intel, as well as provide robot services under ultra-reliable, low-latency conditions that utilize KT’s 5G telecommunications network and Edge Cloud infrastructure, while empowering the NAVER Cloud Platform to function as the robot brain. We anticipate more progress ahead as the specialized engineers of each company devote their collective energy to actualizing the future of robot technology. It is undoubtedly thrilling to be at the moment where the imaginations of the past are able to be realized by the technology of the present. We aim to passionately collaborate through the best of partnerships so that we can produce something no less than extraordinary.